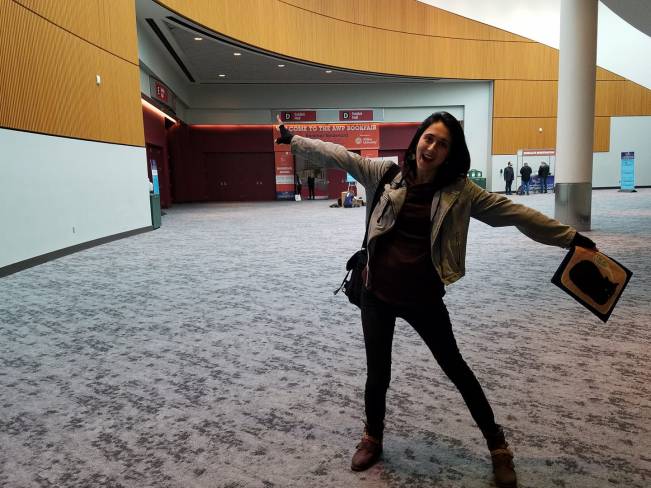 Well, I’m glad to say I survived AWP, aka the nation’s largest literary conference. I acquired 58 books (I say acquired because some were free) which gave my bank account some severe cramps, but I’m bouncing back relatively well.

Now that I’ve somewhat recuperated, I’m ready to get back to studying Japanese. Because of my day job and conference prep, I didn’t have much time to study for two weeks. Some people can jump right back where they left off in their studies with only a short review of their notes. I used to be one of those people. Now, I look at my notes and can’t for the life of me remember writing them.

I know it’s an exaggeration to say I’ve forgotten everything, but the thing is, I have severe PTSD, which impairs my ability to focus and memorize information. Trauma rewires the brain to the point where you can’t recognize who you were before your trauma. I had no trouble learning new grammar and kanji before my trauma, but now I struggle to remember even the basics. I have to work twice as hard to make sure the information sticks in my brain and doesn’t go swirling down the memory loss drain.

To put it bluntly, it fucking sucks.

During the conference I had a minor epiphany. I was trying too hard to study as if I was still the same person I was before my trauma, but I was no longer that person, and I needed to create new study materials and habits for the new me if I wanted to succeed.

When I returned from Portland, I decided to take a step back and look at what I was studying. Prior to the conference, I was doing these things:

Looks somewhat doable, right? When I sat down a couple days ago to review my コンビニ人間 notes, I ended up closing my notebook and throwing my pen across the living room. Something wasn’t working. I needed to cut something out. I was trying to take on too much.

So, what was giving me the most stress? What medium was taking the joy out of learning Japanese?

That, I learned, was コンビニ人間.

As much as I want to read a full-length novel in Japanese, I have to admit I’m not at that level yet. It was a relief to single out the factor impeding my studying. The old me could’ve done it, but not the person I am now, not yet. So I’m shelving コンビニ人間 and going back to the Read Real Japanese series. Short stories and essays are doable. Once I master the grammar, vocab, and kanji in those books, I’ll graduate to a book…probably 魔女の宅急便 (Kiki’s Delivery Service).

I’ve always enjoyed studying, and I want to maintain that joy without getting sucked into reminiscing about my old study habits pre-trauma. Sometimes it’s the little things that make it fun. When I last hit up the Daiso in Elk Grove I bought this set of adorable cat labels. Wish I’d gotten more. These little guys definitely put a smile on my face when I use them.

Now I’m off to brew a cup of jasmine green tea and study. I’ll be back next week with more studying shenanigans and emerging translator adventures.

In the meantime, check out my recent articles at Unseen Japan:

Not So Kawaii: How Japan’s “Culture of Cute” Traps Japanese Women (This has been my best performing article so far!)

Hi! I’m Alyssa, the creative force behind The Japanese Pearl.